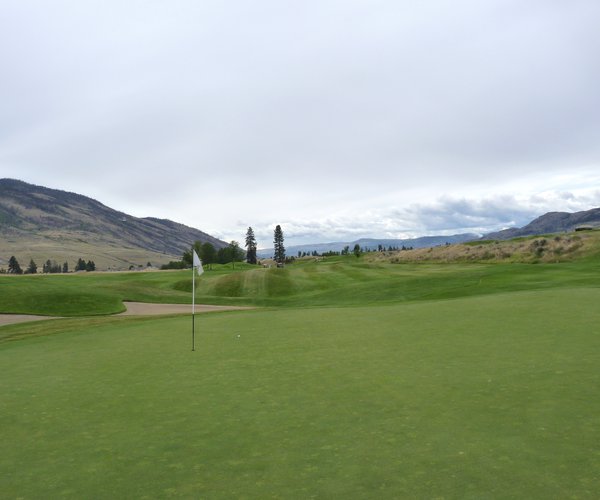 The Dunes at Kamloops

The Dunes at Kamloops

The Dunes at Kamloops: Nestling down in the North Thompson valley, with rugged brown hills reaching up on either side, The Dunes is one of the area's best known golf courses. Here you will find an essentially open links-style layout, handsomely crafted by Graham Cooke, one of Canada's best designers of the modern era.

On both front and back-nines the overriding feeling is one of space rather than compactness, which should give big-hitters the confidence to attack the good-width rolling fairways from the tee. Once on the course you'll discover more undulation and elevation change than you might at first think, much of it created by substantial dune-like mounding. Water hazards do not threaten too frequently, but you'll certainly not want to stray too far offline at the short par-4 9th; a snaking reed-lined pond and attendant bunker flanks the rightside of the hole from tee to green.

The layout occupies a largely natural environment, with some housing arranged around the perimeter of the first five holes. (The close proximity of the housing alongside the 5th hole probably explains why this originally long par-4 has been cut down to a much shorter 290 yards). The closing stretch on the back-nine gets you closest to the North Thompson River, which is hidden behind a small band of trees and bushes.

The Dunes' stylishly bunker-defended greens are fast and true. Their expansive dimensions and slopes will ensure your putting skills are thoroughly examined. Overall maintenance standards here are good without being immaculate. Located just 12 km north of the city, this well-regarded layout is one to include when visiting the area.

Must book in advance. Golf season is March thru Oct.

Walking permitted at all times. Golf carts (fitted with GPS) available for hire.

Kamloops, originally a mining and lumber town, takes its name from the Indian Tk'lemups, meaning the "meeting of the two rivers" - the North and South Thompson rivers joining together close to the centre of Kamloops.