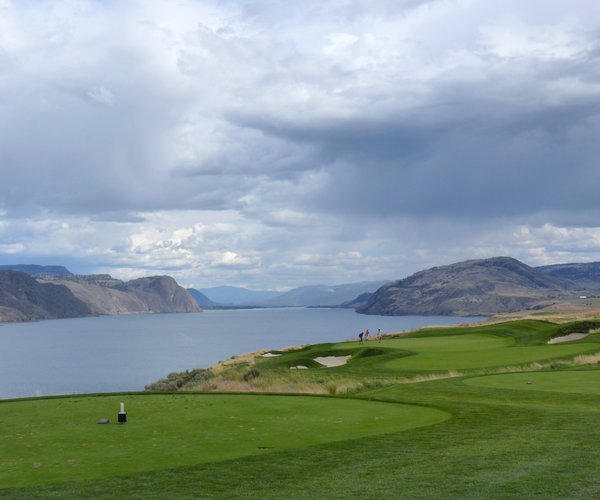 Tobiano Golf: Taking its name from a colour pattern found on pinto horses, Tobiano is the jewel in the Kamloops golfing crown. It is also one of Canada's most breathtaking courses. Unlike equine tobianos, the golf course could never be described as patchy or spotty!

Just a half hours' drive from Kamloops, here you are perched above the immensely scenic Thompson River, wide enough at this point to be described as Kamloops Lake. Across the lake, rugged grey-brown hills rise up from the water's edge, complementing the green of the golf course and shimmering silver-blue of the lake itself. Tom McBroom's course design is nothing short of fabulous, laying down an exciting challenge to golfers of all abilities.

Set in an open expansive links-like environment, many holes use the rolling tumbling terrain to excellent effect. Among this immensely scenic collection of holes, all enjoy spectacular views along the lake, while several stand out as world class. The 7th presents an intimidating par-3, played across a large gully to a hilltop plateau. Testing carries across ravines await at the par-5 8th and 13th holes, while the doglegging par-4 14th is played to a green that appears to sit out in the lake.

The layout's linksy feel is accentuated throughout by the rustic cut of the ever-threatening bunkering and tall fescues that lie beyond the good width fairways. A modest amount of housing will be added over time, but should not detract from Tobiano's natural grandeur. "Dramatic, fun and wow!" seem to be the words that come most readily to mind among those fortunate enough to have played Tobiano.

Must book in advance. Golf season is March thru Oct.

Tobiano sits on the rugged bench lands of the historic Six Mile Ranch. The course takes its name from the spotted colour pattern sometimes seen on Pinto horses. The tobiano gene produces large white skin patches, contrasting with the colour of the horse's base coat. The spotted colouring is generally present from birth and does not change throughout the horse's life.