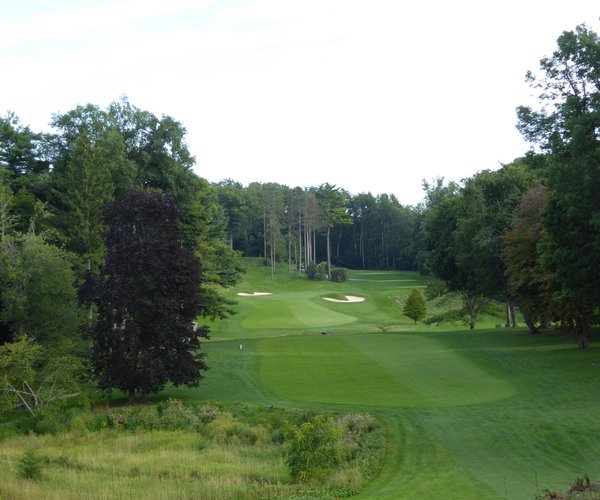 Above distances are for the original South-West combination (used for Canadian Open championships). The newer East-nine is slightly shorter than the other two nines. Also at Hamilton is a 9-hole Short course (par-27, 1205 yds from back tees).

Hamilton Golf & Country Club: "Ancaster" as it is more commonly known, is home to a championship golf course that ranks with Canada's best. Legendary English designer Harry Colt crafted 18 of the picturesque and testing 27 holes, which roam their way across delightfully undulating, partly wooded terrain. Colt's original front-nine loop is now known as the West-nine (holes 1-9); his back-nine loop is today's South-nine (holes 10-18). The much newer East-nine dates from 1974.

Laid out over undulating terrain, the highly rated West-South combination (holes 1 thru' 18) remains faithful to Colt's original routing. Some lengthening has occurred over the years and changes were made to a couple of holes to accommodate the new East-nine. But that's about it.

The West-nine exudes a distinctly woodland feel, with some of Ancaster's tighter holes to be played. The South-nine, which also starts with three testing par-4s, has a slightly more "parkland" character. On this second-nine (of West-South) the trees lining the holes feel less imposing and the demands from the tee a little more forgiving. Many memorable holes are played from nicely elevated tees onto undulating fairways, then back up to strongly bunker-defended elevated greens. The round finishes in grand style at the uphill par-4 18th (the South's 9th). On this final hole you play over a small stream and up to a fabulous amphitheatre green, which sits just below Ancaster's large impressive clubhouse.

On both nines the excellent mix of straight and doglegging holes are lined by a wonderful variety of trees. Stylish bunkering is also ever-present. The small stream that wanders across the South-nine is only really in play at the closing hole, or if you miscue from the tee on one or two others. As with most Harry Colt designs, there's a stunning collection of par-3s, each one different in character, all equally handsome and testing.

When Hamilton G&CC moved to its present site in Ancaster in 1913, the 18-hole course (today's South and West-nines) was designed by Harry Colt. The legendary English golf course architect was in North America at the time to inspect two of his other projects: Pine Valley in New Jersey and Toronto Golf Club. He charged $1,500 for the Ancaster design. | Hamilton's 9-hole Short course provides a reminder of Harry Colt's involvement with Ancaster, and pays tribute to his genius as an architect. | Hamilton's resident professional for 37 years was Nichol Thompson, the older brother of Canada's legendary course designer Stanley Thompson. | Hamilton is an Audubon International Cooperative Sanctuary Program course.