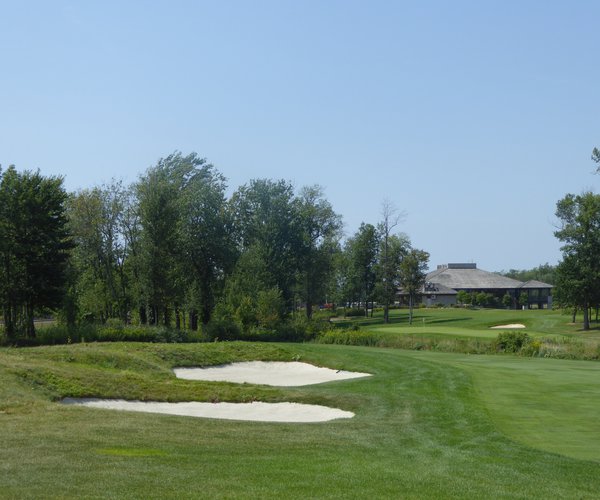 Legends on the Niagara

Above distances are for the Ussher's Creek course. Also at Legends on the Niagara are the 18-hole Battlefield course (par-72, 7309 yds from back tees) and 9-hole Chippawa course (par-30, 2159 yds).

Legends on the Niagara, located alongside a historic 1812 battlefield, is home to two 18-hole championship golf courses: the Battlefield and Ussher's Creek.

Ussher's Creek is a well-rated and pleasantly testing layout. This tree-lined and open parkland course should not disappoint, with many attractive features and several excellent holes to enjoy. Plenty of golfing challenge, a well-crafted design and usually good upkeep all contribute to the appeal of this course. One to include on your play list if you are in the area.

Ussher's Creek (formerly called Streets Creek) winds its way through the original Legends on the Niagara golf course, which bears the creek's name. It was on a plain just above the creek (now the site of the Battlefield course) that the Battle of Chippawa was fought on July 5, 1814. The battle resulted in victory for the United States force of 3,500, who triumphed over 2,000 British troops commanded by Major General Phineas Riall. | Legends on Niagara is an Audubon International Cooperative Sanctuary facility.