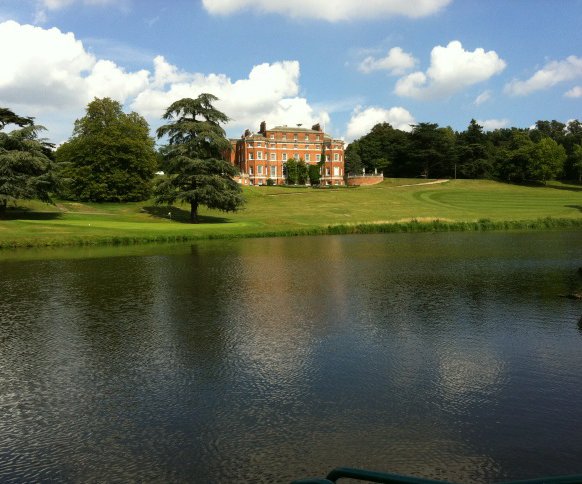 The Palmerston, which opened in 2000, wends its way over pleasantly undulating terrain and through mature woodland. Rare hornbeam, Scots and Corsican pine, 300-year-old oak, cedars, sequoias and monkey puzzle trees are just a few of the many varieties lining the often tightish fairways. In this quintessentially English parkland setting, Donald Steel lays down the need for straight driving from the tee, as well as skilful putting on the often large and sloping greens.

Good course management is also needed to stay out of the stylish (though never excessive) bunkering that flanks several fairways and guards at least one side of the majority of greens. Although water hazards are largely absent, unlike on the Melbourne course, a curious "chalk pit" provides an unusual feature to be crossed at the par-4 12th.

Like the 3rd Viscount Palmerston himself, you will be able to enjoy the tranquillity of this "housing-free" woodland setting, although the A1(M) motorway might be heard on a few holes - a reminder that this is the 21st century and not the 19th.

Must book in advance. Maximum handicap: men 28; women 36. Proof of handicap may be requested.

Brocket Hall, built in 1760 by Sir Matthew Lamb, has been home to two former British Prime Ministers - Lord Melbourne and Lord Palmerston, both of whom served during the long reign of Queen Victoria. William Lamb, 2nd Viscount Melbourne, served as Prime Minister in 1834 and again from 1835 to 1841. He was a mentor of Queen Victoria. Henry John Temple, 3rd Viscount Palmerston, first served as Prime Minister in 1855, aged seventy. He served for three years, but was never much liked by Queen Victoria. His second period as Prime Minister started in 1859 when he was aged 75, and ended in 1865. Although nearly eighty-one years old, he refused to retire and was again elected to Parliament. Before he could take up office he became ill and was forced to stay on his estate at Brocket Hall. He died on 18th October, 1865.