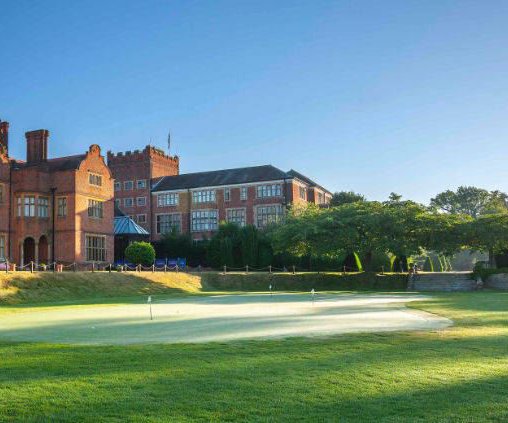 Take exit 25 from the M25 motorway and head north on the A10 direction Hertford. After 11.5 miles the hotel entrance is a left turn off the A10, north of Ware and just past the Thundridge town sign.

After a longish walk to the first tee, the rolling Hertfordshire countryside opens up in front of you and a very interesting and undulating front-nine ensues. Occupying one-side of a picturesque valley, there is plenty of elevation change and, inevitably, water hazards to contend with at the bottom of the slope.

By contrast, the back-nine is played in front of the Manor, in a much more park-like setting. A scattering of mature trees, small lakes, good bunkering and plenty of landscaping combine to create a challenging set of closing holes. The occasional drone of traffic from the nearby A10 on the later holes should not disturb your concentration on this very solid and well-maintained golf course.

Hanbury Manor has staged many top level events over the years. The English Open championship was held here on three occasions, with Lee Westwood taking home top honours in 1998, and not to be outdone, his good friend Darren Clarke winning a year later. More recently the European Senior Tour have made a regular stop at Hanbury Manor. (See our Tournaments section >by Venue >Hanbury Manor).