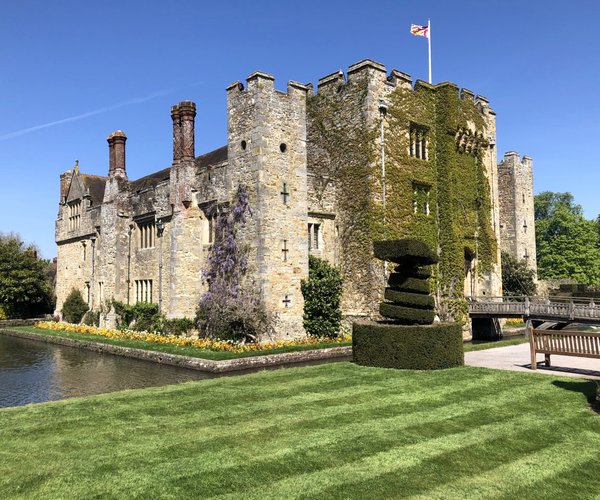 Leave the M25 at Jtn 5, follow A21 direction Sevenoaks/Hastings. After 1 mile take A25 direction Sevenoaks. After o.6 miles turn right into Bessels Green Road at the Kings Head pub (do not go past the green). After 250 yards turn right at T-junction (difficult blind turn - be careful). After 4.3 miles turn left into narrow road, direction Chiddingstone. After 2 miles go over narrow railway bridge and turn right immediately in front of Wheatsheaf pub, direction Hever Castle. After 1 mile golf is on your left.

Hever Castle Golf Club: Laid out on pleasantly undulating terrain, Hever Castle Golf Club comprises three 9-hole loops that provide an absorbing and testing round for players of all abilities. The Kings and Queens courses combine to form the 18-hole Championship course, while the shorter Princes-nine also presents a wonderful layout in its own right.

The Championship course roams across the gently undulating terrain, exuding a classically English parkland air. Some holes are played in a woodland setting, and others in a more open and linksy environment where grassy rough comes into play. After an absorbing front-nine (Kings), the back-nine (Queens) lays down some of Hever Castle's sterner challenges. A testing “Amen Corner” and potentially serious threat to your scorecard, comes at the par-4 11th, signature par-3 12th and fearsome downhill par-4 13th. On all three of these demanding holes, water is menacingly present.

Occasional glimpses of Hever Castle (especially at the 3rd hole) provide reminders of the area's stately background; one can easily imagine a royal hunting party galloping past in days of old. Set in its peaceful and picturesque parkland setting, this is a course that will test both amateurs and professional alike, while providing a tranquil escape from the hustle and bustle of London, which is not too far away.

Visitors welcome after 10am on weekdays and after 12 noon on weekends.

Must book in advance; bookings taken up to 1 week ahead of day of play.

Dating back to 1270, nearby Hever Castle began as a country house, and from 1462 to 1539 was the seat of the Boleyn, originally "Bullen" family. Hever was the childhood home of Anne Boleyn, who became one of Henry VIII's six wives, and unfortunately one of those who lost her head. Ann Boleyn was the mother of Elizabeth I. In 1903 William Waldorf Astor acquired the Castle and gradually added to the estate. In the 1920s the Astors created a 9-hole golf course for their personal enjoyment, which has since been developed into the modern 27-hole course of today. The historic castle is open to the public and also used for conferences.