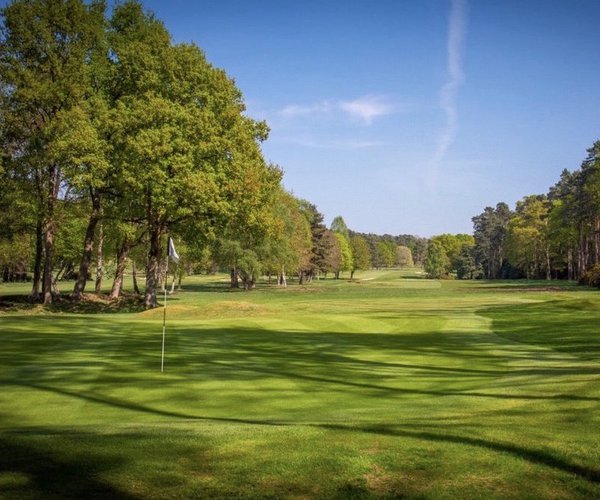 Leave the M3 at exit 4 and follow the A331 direction Camberley / Wokingham. After 100 yards at roundabout follow the A321 signs direction Wokingham / Sandhurst. After 1.2 miles turn left at traffic lights on the A321, direction Sandhurst. After a further 5 miles on the A321 (having passed through Sandhurst and gone under railway bridge) turn right at roundabout onto the B3348 direction Crowthorne. After 200 yards turn left into Ravenswood Avenue. After 400 yards golf is in front of you.

East Berkshire Golf Club lies on the western edge of a tract of Surrey-Berkshire heathland, which is home to a fabulous array of golfing gems, the likes of Wentworth, Sunningdale, The Berkshire, Swinley Forest and the three W's among them. In keeping with this genre of courses, East Berkshire's original open, heathland wilderness has given way to a more wooded aspect over the years, with mature oaks, pines and birches lining many of the fairways.
However, don't for a moment think that the swathes of heather and gorse have completely disappeared. They are much in evidence, and just as capable of swallowing up stray drives as they ever were. Here at East Berks you'll also need to watch out for several water ditches that menacingly skirt some fairways and protect the approach into one or two of the greens. The majority of the course is laid out on reasonably flat terrain, although the first six holes start things off in a gently undulating environment, with a fine mix of long and short par-4's, plus a tricky par-3 at the 5th. Overall, a quiet and very pleasant wooded heathland course, and certainly a great starting place if you are playing the Surrey-Berks tract from west to east.

East Berks has a policy of starting games from both the 1st and 7th holes, depending on time of day and number of players in the flight - so don't be surprised if you are asked to start your game in the middle of the course at the 7th. East Berks' has hosted many top level competitions and top class players. South Africa's Bobby Locke and Gary Player were frequent visitors to the club in the 60's and 70's. More recently Luke Donald played many times in pursuit of 'The Stag', the club's premier amateur competition.