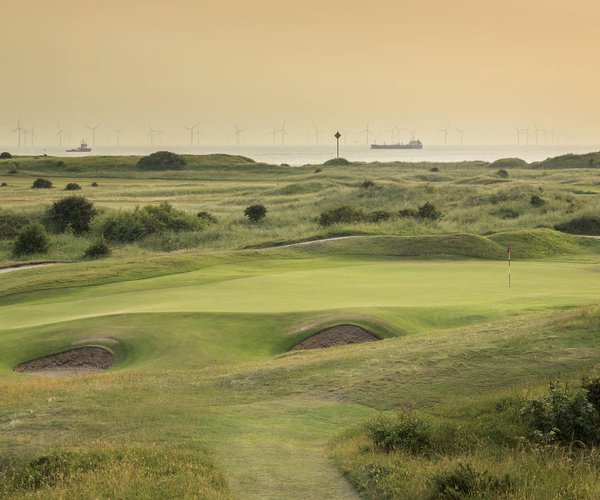 From either the end of the M57 or M58 motorways (north-east of Liverpool) follow the A5036 direction Crosby (for only a few hundred yards), and then the A5207 direction Formby. After 2.5 mi turn left onto the A565 direction Crosby. After 1 mi at roundabout turn right and follow signs to West Lancashire GC for 1.6 mi. After the railway level crossing at Hall Rd, golf is on your right.

West Lancashire Golf Club: Amongst Britain's enviable array of coastal links courses, West Lancs is a gem. The layout here effortlessly reinforces Lancashire's reputation as home to one of the best concentrations of links golf, not just in Britain, but anywhere in the world.

In a wonderfully expansive area of coastal sand dunes, the West Lancs layout comprises two nine-hole loops played out-and-back from the clubhouse. Many elevated tees give you clear views onto the Irish Sea, as well as providing good reconnaissance for the hole ahead. In this very natural duneland setting there are few intrusions from the hustle and bustle of modern-day life. Keeping you company on the links is a coastal walkway, an occasional passing train on the Liverpool-Preston line and a seagull or two gliding overhead.

The front nine plays closest to the sea and is bounded by some impressive dunes. The back-nine initially tracks alongside the railway before it enters a tricky four-hole loop at the far end of the course, starting at the excellent par-3 12th (Valley). This quartet of holes will determine if you eventually have a score to remember or one to forget. The long par-4 14th (Bell) and par-4 15th (Sniggery) are potential card-wreckers, especially on a first outing.

Most of the West Lancs greens allow bump and run approach shots onto the putting surface, but beware the many pot bunkers waiting in the wings. Thick rough also plays a role, often lurking to the sides and beyond the greens. Better to play short and run the ball up, rather than go long and risk a grassy "bird's nest" lie.

Established in 1873, West Lancashire is one of the ten oldest golf clubs in England. The club's original course was laid out on the landward sign of the present day railway line. Later developments required a new layout that straddled either side of the railway, before Ken Cotton's current layout shifted the course fully onto the railway's seaward side. West Lancs is used for final qualifying for Open Championships held at Royal Birkdale and Royal Liverpool.