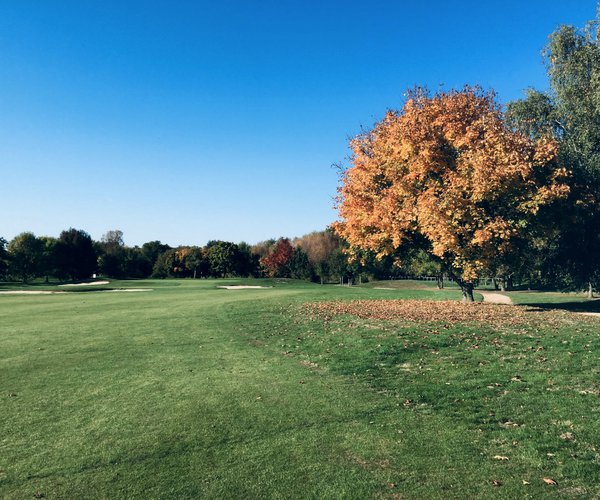 From the A46 motorway to the north of Lyon, take exit 3 and follow the D1083, direction Villars les Dombes. After approx 9 km, in the village of Saint Andre de Corcy, turn left at second roundabout, onto the Route de Monthieux. Follow road for approx 5 km, passing through Monthieux, to Golf.

Le Golf du Gouverneur (Le Breuil course): Located in the heart of France's Dombes region, Le Golf du Gouverneur (Governor's Golf in English) is a full-facility golf destination. With two 18-hole courses, a 9-hole course, golf academy and on-site accommodation, there is plenty here in this quiet, rural idyll to keep the golfer busily occupied. Taking its name from a 14th century castle, now part of the hotel, Le Breuil is the longer and tougher of the two principal courses; the Montaplan course is 700 metres shorter at 5880 metres (6430 yds) from the tips. In keeping with the region's vast number of ponds (see Did You Know section below), water is frequently in play on Le Breuil, either flanking the fairways, or as a tee-to-green hazard to be crossed at three of the four par-3s. Although the terrain here is flat, and earthmounding has not been significantly deployed, the layout possesses a pleasantly natural charm, predominantly created by the interplay of its many water hazards, occasional tree-lined stretches and thick grasses, which border several holes, as well as the ponds. The "water holes" reach their zenith at the 15th; the second-half of this good-length par-5 juts so far out into a small lake, that your only route to the island-green is via a not overly wide island-fairway. Your second and third shots here, are just two in a series of nerve-jangling strikes you'll need to take on during the round. With relatively small and flat greens defended by shallow bunkering, there's plenty of short-game scoring opportunities. However, the key to a good overall score at Le Breuil is staying dry en route to the putting surface.
List of courses: France - East

The area around Gouverneur, known as the Dombes region, is home to a huge number of small and large rain-water ponds that cover some 23,000 acres. Dating back to the 15th century, and mainly found within a 15 km radius of the town of Villars-les-Dombes, these ponds were artificially created in the region's impervious clay soil. They were formed by landed proprietors who saw a more reliable source of revenue in fish-breeding than in agriculture.