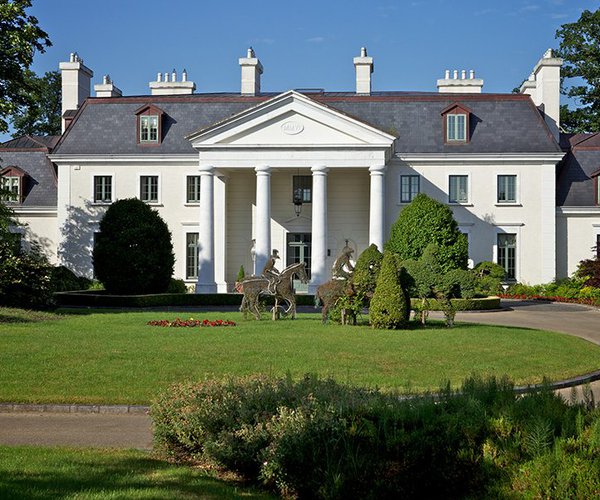 The K Club (Palmer North course): From the moment it opened in 1991, the fame of the K Club spread far and wide, much assisted by the excellence of the Palmer North course. This challenging parkland layout became firmly fixed in golfing legend when it hosted the initially very wet, but ultimately hugely successful Ryder Cup matches in 2006.

Originally known as the North Course, then the Palmer Course, then the Ryder Cup Course, and now the Palmer North, this wonderfully testing parkland layout has many memorable holes and features. Principal among these is the River Liffey. The gently flowing river, which eventually passes through Dublin, weaves its way alongside several holes. At the double-doglegging par-5 7th it hugs the hole's leftside before cutting across in front of the green; a delightful white-painted suspension bridge gives access to the green. The river also induces much knee-trembling at the right-to-left curving 8th - the course's signature par-4.

More water threatens in front of the clubhouse, with a fountain-adorned lake seriously in play on your approach to the par-5 18th green. As Tiger Woods discovered with his opening shot in the Ryder Cup, the lake is also reachable from the par-4 10th tee.

The elegant and tastefully extended Straffan House not only provides luxury accommodation for K Club's guests, but also a wonderful backdrop to several holes. With the original tree-planting now having matured, the Ryder Cup course provides an excellent golfing test, and the K Club itself a luxury Stay&Play opportunity just a stone's throw from Dublin.

Inspired and created by one of Ireland's leading businessmen, Dr Michael Smurfit, the K Club is Ireland's most famous inland golf venue. It was previously home to the European Open (a European Tour event) and most famously, hosted the 2006 Ryder Cup.