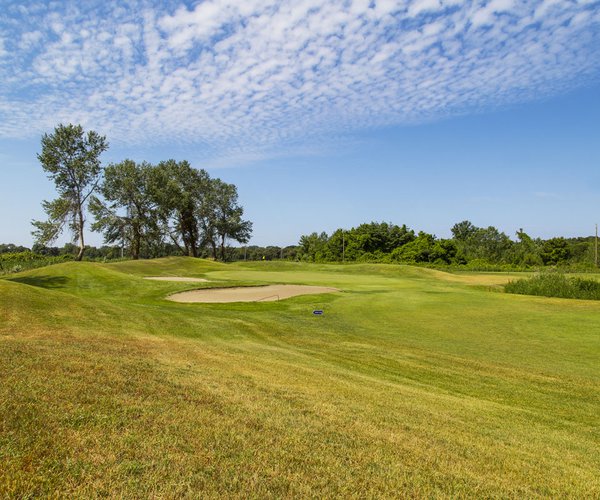 From the A12 Autostrada, between Pisa and Livorno, take the Pisa exit, and direction Marina di Pisa, then Camp Darby, then Tirrenia. In Tirrenia follow signs to Cosmopolitan.

Cosmopolitan Golf & Country Club: With a large and domed clubhouse that perhaps takes it cue from a Carlo Ponti inspired film set, one might have expected a more dramatic golf course to be laid out in the grounds of this former film studio. As it is this very enjoyable and at times quite testing layout, occupies relatively flat terrain, relying on natural looking water hazards on over half the holes to challenge your golfing skills. Holes like the par-4 5th and par-5 15th are lined with water on both sides of the fairway, many others are flanked by water on just one side. On the closing holes of both the front and back-nine loops, water dangerously threatens in front of the respective greens. Bunkering is largely absent from the layout, with perhaps only five bunkers in total (more are planned to be added), so hitting fairways and greens and staying away from the small lakes and reed-filled ditches becomes your playing priority. Although there are not too many items of scenic interest beyond the course (the port of Livorno puts in an appearance away in the distance), this is a very quiet and natural golfing environment, attractively surrounded by mature woodland. The opening holes of the back-nine are played along some testing, tree-lined stretches, which contrast with this generally flat and open layout, where generous width fairways are flanked by either small lakes and ditches, or rolling earthmounds. The plentiful water hazards have obviously been discovered by families of the beaver-like coypu, but will hopefully not be discovered by too many of your golf balls.
List of courses: Italy - Central

Cosmopolitan takes its name from the famous Italian film studios that used to occupy this site. The parcel of land was acquired by the Golf Resort developers from the studio's then owner, Guendalina Ponti, who is the daughter of film producer Carlo Ponti and his legendary film actress wife, Sophia Loren. >> Located very close to the golf course is Camp Darby, an Italian military complex used by U.S. military forces in Italy. The base was named in memory of Brigadier General William Darby, Asst Division Commander of the US 10th Mountain Division, who was killed by enemy artillery in 1945 on the shore of Lake Garda. Camp Darby is home to the American Beach in Tirrenia, the only U.S. military beach in Europe.