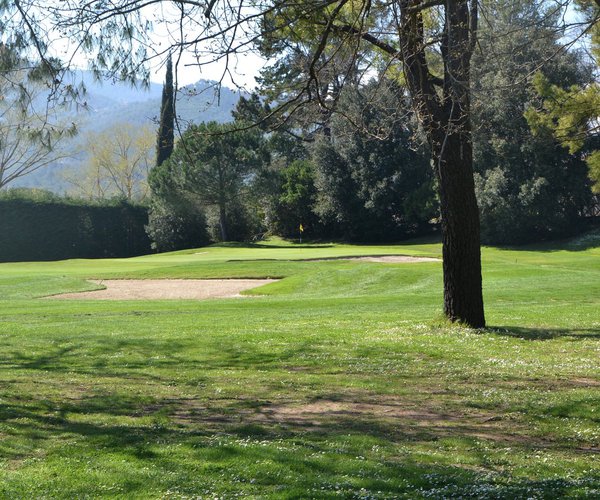 Golf Club Garlenda nestles down in the attractive Lerrone Valley, with the Torrente Lerrone (river) separating one half of the course from the other. Wooded hills rise up on either side of the valley, with many olive trees prominent alongside the course and flanking several fairways. The course may lack the length to see an early return by the European Tour, but it does lay down a solid golfing test, with nicely shaped and well-maintained holes laid out in this quiet and picturesque countryside setting. Much of the course occupies relatively flat terrain, where generally good-width fairways, some a little tighter, lead you to large and sloping putting surfaces. Expansive bunkering protects the greens and is often found along the fairways, although its shallow profile creates less impact than if mounded or raised-fronted bunkers were used. Beware Harris's use of a single bunker often deployed about 30 yards short of the green. Several holes are played alongside the wide Torrente Lerrone, while the good-length par-3 13th demands a carry across the river to find the safety of the "dance floor". This very pleasant parkland layout, challenging at times, more forgiving at others, finishes with three nicely dog-legging holes, which are played along a slightly more undulating part of the course.
List of courses: Italy - North West

Golf Club Garlenda hosted the Italian Open Championship in 1971 (see our Tournaments section > by Venue > Garlenda). The Club was founded by Enrico Galleani. >> The village of Garlenda sits in the valley of Lerrone, and became known for having the largest trotting race track in Europe. In the area around Garlenda you will find olives, wine and fruit being cultivateed. The town center comprises a gathering of houses surrounding the baroque parish church, Natività dell Vergine, built in the 17th century.