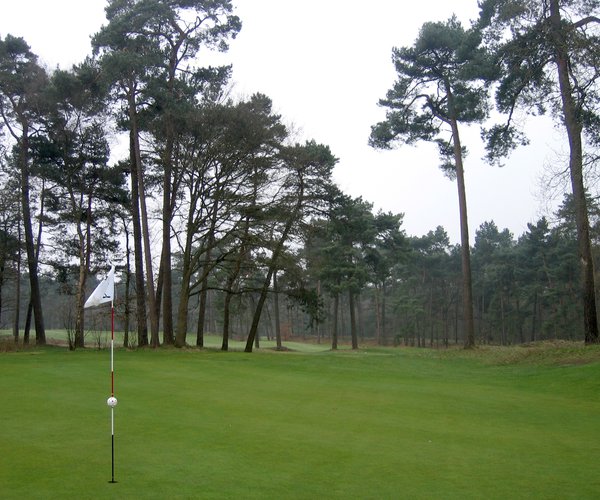 From the A27 (Utrecht-Hilversum road) take exit 33/Baarn and follow direction Baarn Hoge Vuursche. At third lights turn right direction Baarn. After about 500m, after the viaduct, the entrance of the golf is on your right.

Hilversumsche Golf Club is home to a course that stands good comparison with the great Surrey/Berkshire heathland courses of England. In fact two Englishmen are responsible for the present layout. The first nine holes at the Club's current Soestdijkerstraatweg location were built by Henry Burrows in 1917. The second and arguably the best nine were added in 1928 by the legendary Harry Colt.

Starting with a good-length par-5 then a short par-4, the excellent wooded heathland credentials of Hilversum are immediately apparent. Avenues of predominantly pine trees, but also oak, birch and beech, line the firm and gently undulating fairways. Occasionally you get the chance to confidently hit-out with the driver, although most fairways provide a tightish proposition, especially on a first outing.

Many of the greens are well-bunkered, especially on the four attractive and demanding par-3s. Hilversum will not only give your game a good examination (as it has done with professional golfers during many Dutch Open championships), it also provides an easy-going walk through a marvellous woodland setting.

Straddling the border between the Dutch provinces of North Holland and Utrecht, the course is surrounded by a large forested area. You'll no doubt here the chatter of many woodland birds during your round in this quiet golf domain. Adding to the natural environment, attractive bands of heather border several holes, adding a splash of colour when in flower during the summer months.

Must book in advance. Maximum handicap: 24. Proof of handicap required.

Much of the Hilversum course pivots around a quaint woodland pub, The Herberg Boschoord (in English "Inn in the Wood"), which you'll see on your way to the 13th tee and as you come off the 17th green.