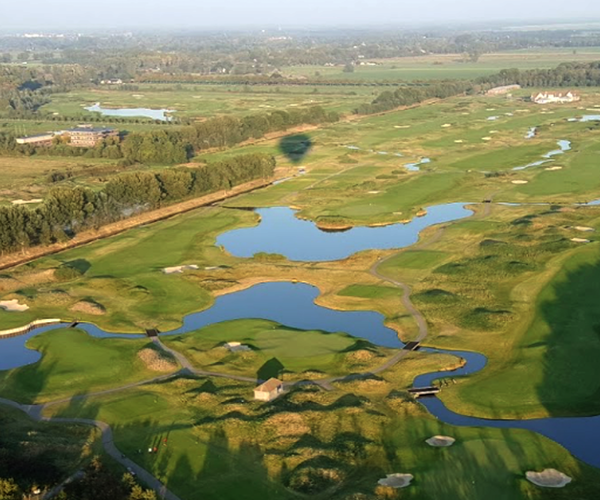 In time, an 18-hole Sam Torrance designed, public access course is planned to open at The Dutch.

The Dutch Golf Club, with its fully private members-only course, opened its doors for play in October 2010. What greeted the club's members and their invited guests was a challenging Colin Montgomerie design, where a typically flat expanse of Dutch farmland had been transformed into a top-quality championship layout ... one that would feature in the Netherland's bid to host the 2018 Ryder Cup.

Located alongside the small town of Spijk, just outside Gorinchem, the course exudes a predominantly open, inland links character. Links afficianados will warm to the square-cut tee boxes, gently rolling sculpted terrain, and tufted mounding that lines several fairways. However, the big departure from a traditional links can be measured by the amount of water in play ( ... rather than in view alongside the course!).

Here at The Dutch several small lakes and meandering water ditches play a significant part in proceedings. The middle section of the front-nine is the least impacted by water. Almost the entire back-nine will require careful course management and adroit ball striking if you are to stay "dry".

The plan is that this open linksy layout at The Dutch will be joined at some time by a second 18-hole course, which will be open to green fee payers.

Within a few years of opening The Dutch became an established European Tour venue, hosting both the Dutch (KLM) Open and Dutch Senior Open championships (see our Tournaments section >by venue >The Dutch).

Six European countries vied for the honour to host the 2018 Ryder Cup. The Dutch was the chosen venue to front the Netherlands' bid. After the lengthy bidding process, the French bid came out on top, with Golf National in Paris as the winning venue.