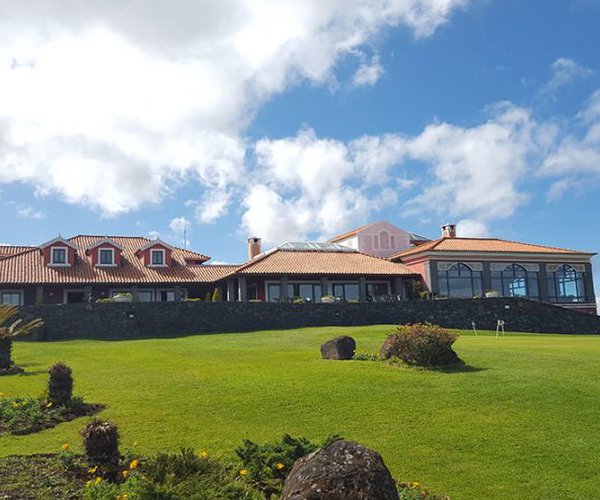 Above distances are for the Machico-Desertas combination. The Serras-nine, at 2,920 m from the back tees, is slightly shorter than the other two nines.

Located inland and in a woodland area, the course is perched at an elevation of 500 metres above sea level. The views offered from the layout's higher elevations are truly stunning. The Machico-nine and Desertas-nine are the two loops that regularly hosted the Madeira Island Open, while the slightly shorter and easier-going Serras-nine, also provides an enjoyable test. The demanding championship layout includes several challenging holes, like the long par-3 4th on the Machico-nine, played over a deep ravine. The par-4 2nd on Machico is another unforgettable hole.

SOME HISTORY: With the settlement in Madeira of British families over the centuries, it was perhaps only a matter of time before they introduced the game they couldn't be without ... golf. In 1937 Clube de Golfe Santo da Serra was born (as Golf Club Madeira), when the Miles brothers designed a nine-hole course. In 1991, at the behest of many local golfers, a major expansion project was launched, and legendary designer Robert Trent Jones Snr was brought in to create the current layout.

Santo da Serra, on all but a handful of occasions, has played host to the European Tour's Madeira Islands Open (see our Tournaments section >by Venue >Santo da Serra). The tournament, perhaps more than any other, has propelled many players to their first-ever European Tour victory ... not least, Santiago Luna, Niclas Fasth, Bradley Dredge and Peter Uihlein.