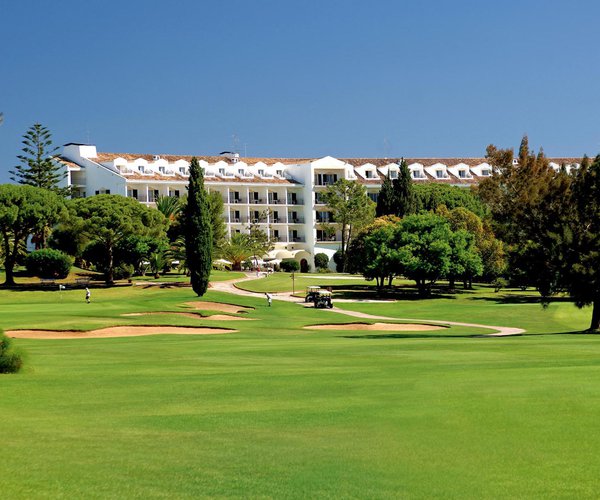 Penina Hotel & Golf Resort is home to one of the most celebrated golf courses on the Algarve, and former long-time home of its designer and three-time Open Champion, Sir Henry Cotton. Complementing the Championship course at Penina, you can also hone your game on the 9-hole Resort and Academy courses.

With some notable exceptions at the opening and closing holes, the terrain on the Championship course is relatively flat. The generally tree-lined fairways weave their way through an elegant parkland environment, where Cotton transformed a previously open landscape. 360,000 trees were planted, all of them now fully mature. Spicing-up many of the excellently crafted holes, you will need to avoid several water ditches and small lakes. Lay-up or go-for-it is a frequent choice to be made.

The overall layout has a distinctly English parkland feel, with enough space to allow shoulder-opening opportunities for big-hitters, not least at the short par-4s. The back-nine loop weighs-in with a par of 38, opening with two tough par-5s, and an easier par-5 duo to close-out your round.

The 9-hole Resort course begins with the same parkland character of its grander sibling. This course also incorporates two small lakes and some more open areas that utilise an area of sand dunes on the property. The round concludes with a hole that ascends to the clubhouse and transitions you back to a more parkland setting.

Visitor fee, 18-holes in high season (Oct/Nov and mid-Feb thru' May) on the Championship course: €128.

Penina's championship course (now known as the Sir Henry Cotton Championship course) was the first resort golf course to be built in Portugal. It is unquestionably where golf started in this southwestern corner of the Iberian Peninsula. Three times British Open champion, Sir Henry Cotton was encouraged to visit and lay out a course over a former rice field. On an unpromising wet, treeless site, he grasped the opportunity with relish, and later made Penina his home. | Penina has hosted many top-level tournaments (See our Tournaments section > by Venue > Penina). | Penina is a member of the Audubon Co-operative Sanctuary System.