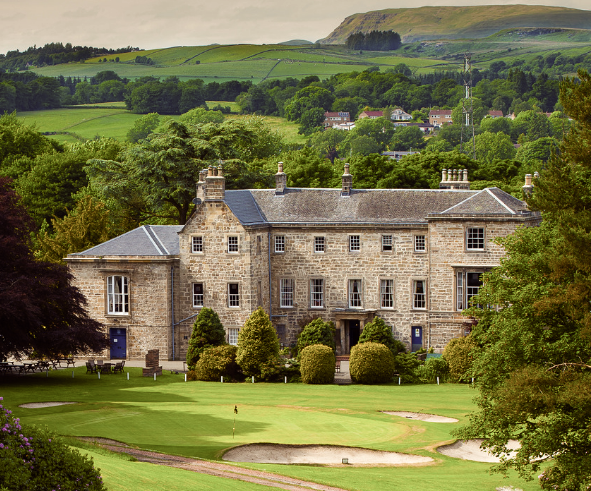 Above distances are for the Cawder course. Also at Cawder GC is the 18-hole Keir course (par-68, 5871 yards from back tees).

Cawder Golf Club is home to two pleasantly tree-lined and open parkland layouts, the championship Cawder course and par-68 Keir course. Located alongside the River Kelvin, about a 20-minute drive north from central Glasgow, this James Braid designed layout occupies a picturesque setting, far from the bustle of city life.

The Kelvin River flows past the northern boundary of the course, while all around is the the natural beauty of the Campsie hills. The historic Antonine Wall meanders through the course, although you'll probably need to ask a club member for the exact routing of this Roman-built turf fortification. Providing a wonderful back drop to the downhill par-3 18th hole is the Club's 18th century clubhouse, built in 1764.

Cawder Golf Club is located in East Dunbartonshire, alongside the village of Cadder, from which it takes its slightly adjusted name. Situated on the Forth & Clyde Canal, near the River Kelvin, Cadder was the site of a Roman fortification on the Antonine Wall. The wall, a turf fortification built on stone foundations, represented the northernmost frontier of the Roman Empire. It was built by the Romans as a defensive wall between the Firth of Clyde and Firth of Forth.

Cawder (aka Cadder) should not be confused with Cawdor, as used by William Shakespeare in his famous Scottish play, Macbeth. The "Cawdor" of Macbeth fame is located outside Nairn (173 mi north of Cawder), and is home to a 14th-century castle.