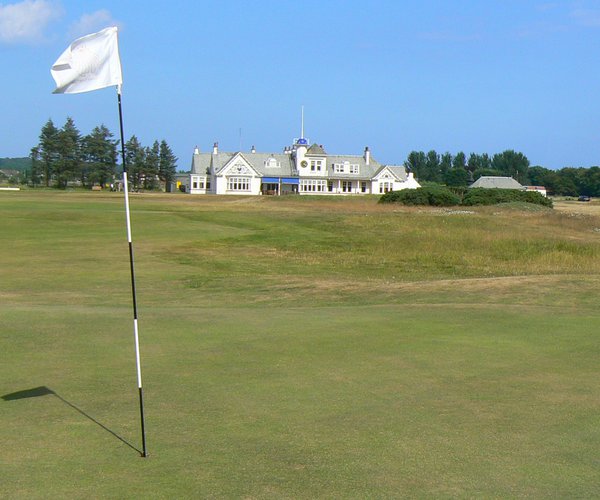 From the east side of Dundee, follow the A92 direction Abroath. After approx 7.5 miles, take exit Carnoustie / Barry Mill and follow direction Carnoustie. After approx 1.1 miles, at roundabout, turn right direction Monifieth onto the A930. After o.5 miles turn left direction Golf Course / Barry Station. After o.3 miles golf entrance is on your right.

Panmure Golf Club: Just a mile or so along the road from Carnoustie, Panmure is one of the lesser known gems of Scottish golf in this area. Although set back a mile or two from the sea, in a rather rural and occasionally wooded environment, the course is essentially links in character.

The nicely undulating terrain of low dune ridges, is home to plenty of humps, bumps and hollows, with firm, sandy-soil fairways leading you to the often large and sloping greens. The early and later holes are partly tree-lined, but relatively open terrain and attendant gorse bushes and heather feature more strongly in the middle part of the course. Water ditches are only in play on a couple of holes - at the tricky par-4 12th and the slightly longer par-4 13th - good course management is essential at both.

At the far end of the course you will glimpse neighbouring Monifieth Links, and on the homeward nine, the same trains that rattle past Carnoustie and Monifieth also run alongside some of Panmure's holes, but never in sufficient numbers to detract from your enjoyment of this otherwise quiet, natural and thoroughly pleasant golf layout. From the 16th onward the wonderfully distinctive frontage of Panmure's clubhouse draws ever nearer, and so too the welcoming 19th hole.

Visitors welcome on weekdays and weekends (Saturdays after 3pm).

Panmure is used as a qualifying course for Open Championships held at Carnoustie. The distinctive pavilion-style clubhouse dates from the Edwardian period (early 1900's). Within its walls, men are required to wear a jacket and tie in the Main Lounge and Dining Room.