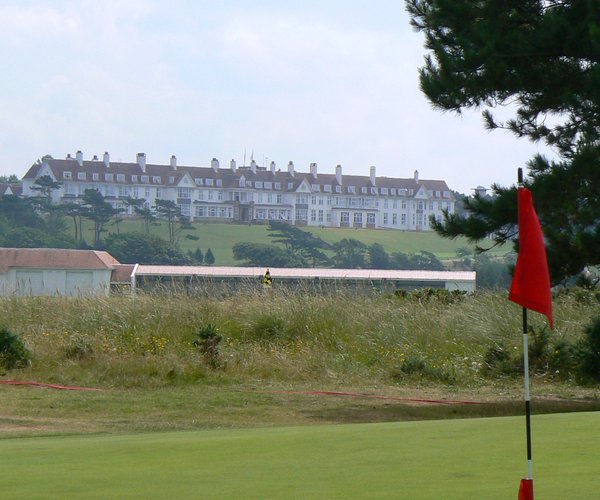 Above distances are for the King Robert the Bruce course. Also at Trump Turnberry is the 18-hole Ailsa Course (par-71, 7489 yards from back tees) and 9-hole Arran course (1,996 yds from back tees).

Follow the A77 south past Ayr, direction Maybole. Continue on the A77 through Maybole. After 7 miles turn right onto the A719 direction Turnberry. After approx o.4 miles turn left into golf.

Trump Turnberry (King Robert the Bruce course): In days gone-by, Turnberry's second course (known as the Arran) provided golfers with an interesting though modest "appetiser", prior to embarking on the sterner test of the revered Ailsa course. All that changed in 1999 when Donald Steel was commissioned to transform the layout and give it much beefier championship credentials. Several of the Arran's holes were absorbed into the new course, renamed as the Kintyre. And later still the Kintyre became the King Robert the Bruce course, with another significant revamp by Martin Ebert

Not only did Steel and then Ebert revamp existing holes, but their redesigns took the Kintyre/King Robert layouts seaward and into new territory on Bains Hill. Here new clifftop holes, with three or four commanding breathtaking sea views appeared. The redesigns and extensions retained many of the Arran's original fundamentals, not least the need for accuracy from the tee, and the ability to guide the ball past classic revetted bunkering. The opening and closing sections are still played through flattish terrain, where the fairways are lined with dense gorse bushes - although not quite as tightly as in days of old. The middle "clifftop" section is where the course really comes alive and the sea views abound.

No longer a baby brother to the Ailsa. Nowadays the King Robert the Bruce is a more serious companion, and well worth playing as a great test of golf in its own right.

The King Robert the Bruce course (formerly known as the Kintyre course) has been used as a final qualifying course for major championships, including the Open Championship and British Seniors Open, when they are staged at Turberry.

Turnberry's iconic lighthouse, which was built by the family of celebrated author, Robert Louis Stevenson, is located amongst the ruins of Turnberry Castle. It was in this medieval castle that Robert the Bruce, King of Scotland for 23 years, was born in July 1274. Robert the Bruce led a series of battles against the English between 1310 and 1314, which won him control of much of Scotland. At the Battle of Bannockburn in 1314, his forces defeated a much larger English army under Edward II, thus re-establishing an independent Scottish kingdom.