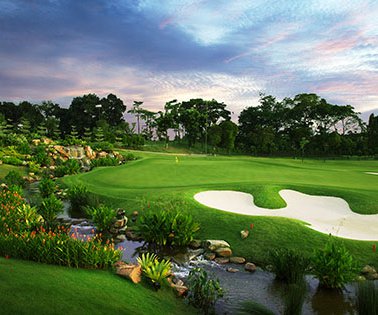 Take the Ayer Rajah Expressway (AYE) west from downtown Singapore. Take exit 13 and follow Jurong Town Hall Road north. After just over 1 km turn left into Science Centre Road, and golf will be on your left.

Jurong Country Club: GOLF COURSE WAS PERMANENTLY CLOSED IN DEC 2016 to make way for the Singapore-KL High-Speed Rail project, as well as the development of hotels, offices, residences and retail outlets.

[Original Where2Golf description]: Jurong Country Club's championship layout benefitted in 2011 from a substantial remodelling and renovation, designed by Ted Parslow. In the process the course has acquired a sharper look and a considerable amount of stylish and more threatening bunkering.

Jurong's absorbing and challenging front-nine is still located closest to the busy Ayer Rajah Expressway, where the sights and sounds of the city intrude to some extent. Pronounced elevation changes on the early holes give the fairways a tightish feel, where out-of-bounds adds to the challenges. The good-length par-3 6th remains one of Jurong's most attractive holes, with water and a rock wall to cross in front of the green and palm trees elegantly arrayed behind it.

Whereas the pleasantly undulating front-nine brings you closest to the traffic, the flatter and water defended back-nine gets you into a quieter and more tranquil area alongside Jurong Park. An attractive water channel (Sungei Jurong) separates the park and golf course. This relatively open back-nine provides some generous width fairways, although several are bordered by threatening water hazards.

On Jurong's well-presented and nicely maintained layout, the large undulating greens have numerous pin positions varying from easy to down-right difficult. At the conclusion of the classical parkland back-nine, the short par-5 18th provides a final risk-reward birdie opportunity for accurate big-hitters, as it makes its way gently uphill towards Jurong's impressively large red-roofed clubhouse.

Jurong has hosted many top level competitions including Asian Tour events (see our Tournaments section >by Venue >Jurong CC). It also hosted the USA's President Bill Clinton for a round of night golf on one occasion.