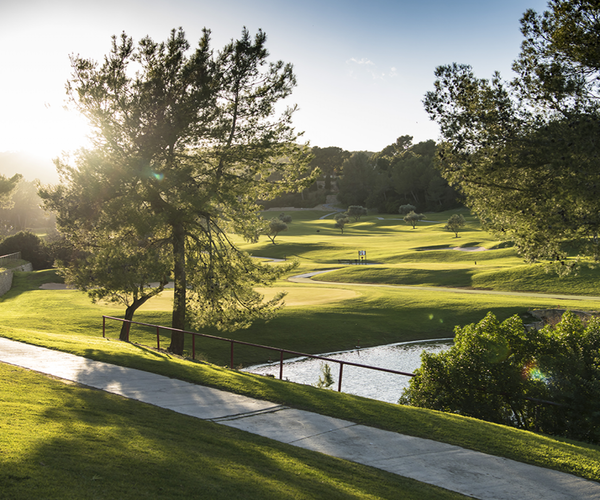 Arabella Golf Mallorca is home to three championship golf courses - Son Vida (the oldest), Son Muntaner (the highest rated) and Son Quint (the newest and most forgiving). The separate clubhouses of each course are situated about a kilometre apart from each other, with the Son Vida course closest to the Sheraton Arabella hotel.

As the third 18-hole course of Arabella Golf & Spa Resort, Son Quint falls between its sister courses in terms of length and technical difficulty. Designed by Ramon Espinosa, the layout includes two large fountain adorned ponds, which loom large on the rightside of the par-4 10th and par-4 11th fairways, and from tee-to-green at the par-3 12th. Beyond this watery "Amen Corner" at the start of the back-nine, the only other hazards you'll encounter are of the sand variety, with no shortage of them along the fairways and guarding the greens. Also defining the holes is a pleasant scattering of pine and olive trees.

Occupying both flatter and more undulating terrain, the layout generally exudes an open feel, occasionally becoming a little more tree-lined. Thanks to its elevated position in the hills behind the city of Palma, the layout offers some scenic views down to the sparkling Bay of Palma. At the par-4 8th, the highest point on the course, you tee-off facing directly towards Palma Cathedral.

Son Quint is a member of the Arabella Golf group, which manages golf courses in Mallorca and three German-speaking countries in Europe. The group partners with Starwood Hotels for the provision of luxury accommodation at or close to their golf venues. The Arabella portfolio includes: MALLORCA - Son Vida, Son Muntaner and Son Quint; GERMANY (all in the Munich area) - Schloss Egmating, Gut Häusern and Münchner Eschenried (45-holes); AUSTRIA - Schloss Pichlarn, Fuschl (9-hole) and Salzburg-Eugendorf; SWITZERLAND - Davos.