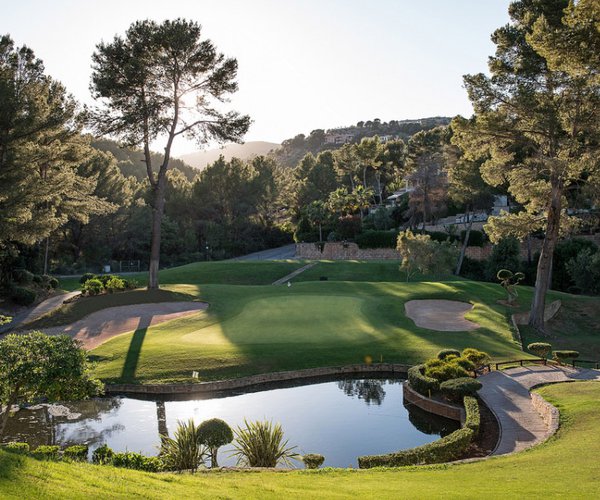 Arabella Golf Mallorca is home to three championship golf courses - Son Vida (the oldest), Son Muntaner (the highest rated) and Son Quint (the newest and most forgiving). The separate clubhouses of each course are situated about a kilometre apart from each other, with the Son Vida course heading out and back in two nine-hole loops from the onsite Sheraton hotel.

Although the oldest and shortest of the Arabella trio, Son Vida is the only one to have twice hosted the European Tour (see the Did You Know section below). This venerable old course, originally designed by renowned English architect Fred Hawtree, provides plenty of variety. The routing of the holes was left largely unchanged by Kurt Rossknecht's restyling in 2001, with some holes occupying flatter terrain and others with more pronounced elevation changes. There are occasional views beyond the course, although much of the time the individually routed holes journey through a pleasantly wooded estate of opulently large mansions and villas.

With its tight and often tree-lined fairways, especially on the front-nine, this not overly long course demands accuracy from the tee on many occasions. Sweeping doglegs characterise several holes. Water rarely threatens until you come to the more open closing stretch of holes. Here water hazards certainly play their part at the testing downhill par-3 16th and snaking par-5 18th. On the final hole a large pond on the left of the fairway will catch errant drives from the tee. As you play your second shot and approach to the final green, an even more threatening pond looms large on the right.

Son Vida has hosted many top level events, not least the European Tour's Balearic Open, won here in 1990 by Seve Ballesteros and in 1994 by Barry Lane (see our Tournaments section >by Venue >Son Vida). | Son Vida is a member of the Arabella Golf group, which manages a number of golf facilities in Mallorca, Germany, Austria and Switzerland (see Son Muntaner - Did You Know section).