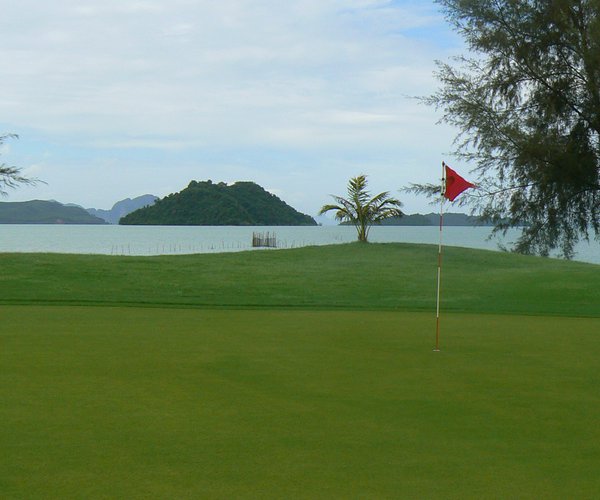 An additional nine-holes, providing floodlit evening golf, are planned to open some time in 2008/09.

From Phuket Town, follow route 402 to the northern end of Phuket, near to the airport. Turn right after km marker 25 onto route 4027. After about 4 km golf entrance is on your left.

Mission Hills Phuket Golf Resort & Spa: Here in Phuket you will find one of the two Mission Hills resorts in Thailand (the other is in Kanchanaburi). In addition to Jack Nicklaus's enjoyable and challenging layout, you are twice brought to the ocean's edge. From the par-3 4th and par-5 13th, you'll enjoy magnificent vistas onto the Sea of Phuket and its many offshore islands, which include Phuket's biggest neighbours, Ko Yao Yai and Ko Yao Noi. After the two visits to the ocean, there could be a slight sense of anti-climax as you play the second-half of each nine; Nicklaus's always absorbing layout ensures this is minimised. Although relatively flat, the golf course contains pleasantly contoured fairways and several large sandy waste areas that interplay with sizeable lakes and lagoons. Very few rounds played here are "hazard free". The par-5 2nd and par-4 5th holes rather uniquely are played to the same water-surrounded island green. The terrain is deliberately kept quite open, with only a few maturing palms dotted around the landscape. Nicklaus has provided good definition to the holes, mainly through the water hazards and excellent bunkering, with many small pot bunkers and larger, open sand traps waiting to catch wayward shots. In terms of hole definition and knowing the best line to hit to, it would help if better distinction was created between the fairways and the semi-rough; all too often they seem to blend into each other. Perhaps an example where the generally acceptable green-keeping could be improved.

Non-metal spike facility. Compulsory for each golfer to have a golf cart and caddie.