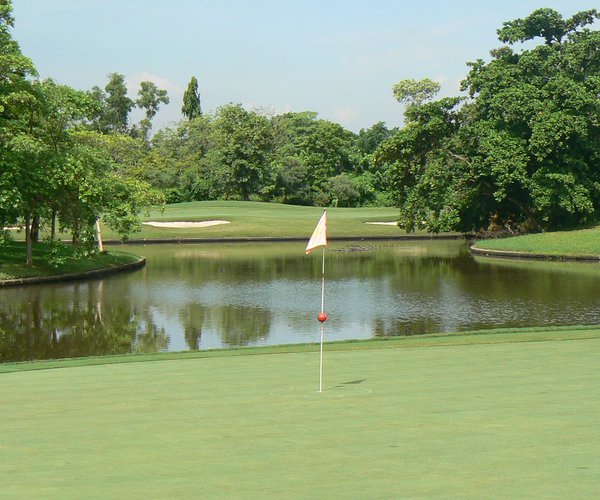 Navatanee Golf Course: This pleasant and testing parkland layout was one of Robert Trent Jones Jr's earliest designs, built specifically for the 1975 World Cup of Golf. It took two years to turn what were then rice fields into Thailand's first international standard professional championship venue.

Navatanee's claim to the top spot in Thailand certainly held sway throughout the 1970s and 1980s. Nowadays such a claim is debatable - even following Trent Jones' 1997 modifications to the course. The current layout, which occupies relatively flat terrain, doesn't include overly pronounced earthmounding or fairway contouring, but the layout is still thoroughly absorbing and full of classic design features.

The best stretch at Navatanee starts with the short par-4 5th (the first water-defended hole), and then onto the very testing par-4 6th. Heavily bunker-defended greens are found at the good-length par-3 7th and short par-4 8th. Closing out the front-nine is a fabulous water-hugging par-5. It doglegs right-to-left like Bay Hill's 6th, but with a good-width water channel crossing the fairway at halfway. The back-nine is also laced with many good holes, but can be something of an anti-climax after the closing front-nine stretch.

Hitting the putting surfaces here requires high-flighted shots into them; deepish bunkers protect the front of several greens. The fairway bunkers are as menacing as those greenside. Navatanee has much less water than on the average Bangkok course, quite surprising given its rice paddy origins.

Navatanee remains one of the country's top "trophy" courses, but more recent arrivals have challenged its supremacy as Thailand's No.1.

Non-metal spike facility. Golf carts compulsory for visiting golfers. Caddies used by all players. Pace of play is expected at no more than 4 hours for a four-ball.

Navatanee (sometimes written Nawathani) was Thailand's first world-class championship golf course to be built. The course opened for play in 1973 two years ahead of hosting the 1975 World Cup of Golf, won by the USA-team of Johnnie Miller and Lou Graham.

Navatanee loosely translates as "the place of Nava", Nava being a shorthand for the name of the club's founder, Sukum Navapan. The club prides itself on maintaining a brisk pace of play, so fourballs are expected round in no more than four hours - quite achievable with one cart and a minimum of one caddie per visiting golfer.