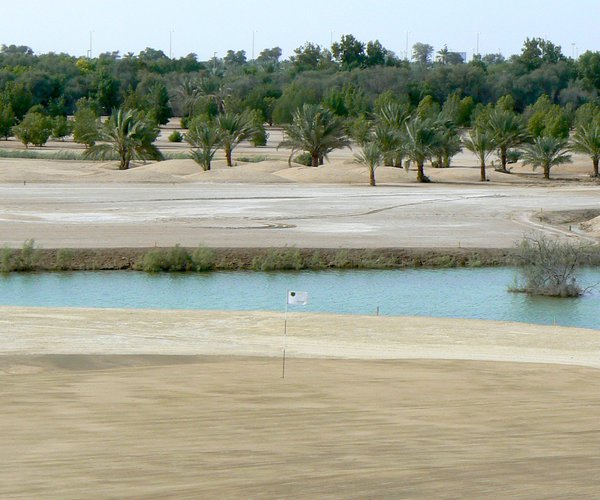 Well signposted in the vicinity of Abu Dhabi International Airport and from passenger terminal.

Al Ghazal Golf Club: While you're in UAE, why not try a round of golf on one of the world's best sand courses, and sample golf as it was originally played in the desert. Al Ghazal is unquestionably a very good and testing layout, although perhaps not as easy-on-the-eye as if it were grass. Here the entire game is played on sand, and that means fairways, greens (called browns) and obviously the bunkers. The course stretches out across an upper and lower plateau, which creates some interesting elevation changes on several holes. Within its testing 6724 yards (off the white tees) are many excellent dog-legging par-4's, uphill and downhill par-3's (the 11th is a gem), substantial bunkering and occasional water hazards, the most dangerous of which comes into play at the long par-5 17th, another excellent hole. The large and sloping browns, which include several arranged on two-tiers, roll as straight, fast and true as anything you'll find on a grass course. Sand golf may not be to everyone's liking, but it is remarkable how close to grass golf it comes - what's missing are all those lush green fairways. The "greening" effect here, comes from a pleasant array of palms and small trees that surround the course and line some of the holes, and of course the small artificial grass mat you carry around, for shots from the marked-out fairways. This may not be golf as you've known it before but you may just get to like it ! Rumour is that even Monty became a convert once he'd played at Al Ghazal !
List of courses: UAE

In 2004 Al Ghazal hosted the first ever World Sand Golf Championships, an event repeated here in 2005. Among the big name golfers who competed, including Colin Montgomerie, Nick Faldo, Padraig Harrington, Ian Poulter, Miguel Angel Jimenez and Paul McGinley, the Championships can boast two distinguished winners: Greg Owen (Eng) in 2004 and Thongchai Jaidee (Thai) in 2005. | To the right of the 7th hole is an ancient archaeological site, which has yielded flint tools dating back to 5000BC. The sailing boat that features in the middle of the course is a reminder that thousands of years ago this spot was actually part of the Abu Dhabi coastline - most of the current back-nine was under the sea in those days.