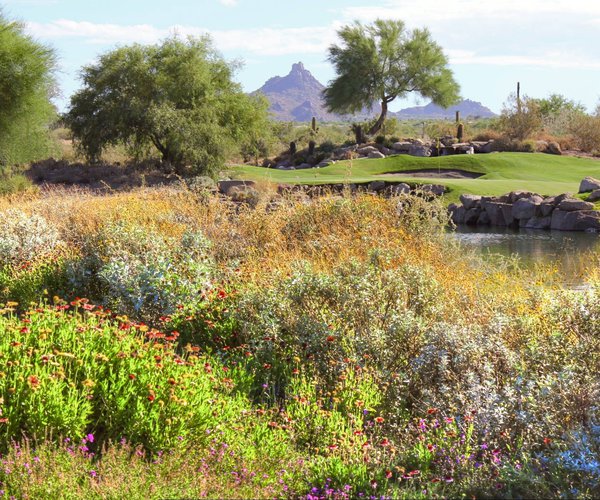 Grayhawk Golf Club (Talon course): Of the two top-quality courses here at Grayhawk, it is usually the Raptor that just gets the edge over the Talon. But don't let that dissuade you from a round on the challenging and scenic Talon. In his younger days as a resident of Scottsdale, it was as much on the Talon as on the Raptor that Phil Mickelson honed his irrepressible golfing skills.

The tighter and slightly shorter of the two, the Talon was excellently designed and crafted by David Graham and Gary Panks. The layout will most assuredly test your accuracy and course management to the full, as well as your putting skills. The large, fast greens contain a mischievous array of slopes. Getting down in two can never be guaranteed on these mercurial putting surfaces. As on the Raptor, large and deep bunkers feature strongly, especially around the greens, some of them embellished with railway-sleepered faces.

On what was originally flattish terrain, the Talon's fairways were landscaped to create a pleasantly rolling character, with plenty of bumps and hollows to be navigated en route to the sometimes significantly elevated greens.

Grayhawk Golf Club was formerly the home club of Phil Mickleson. Phil's Grill is one of an array of excellent facilities in the splendid clubhouse. | Both Grayhawk courses have hosted an array of top quality events; the Raptor course hosting several prestigious team events as well as the PGA Tour on several occasions (see our Tournaments section >by Venue >Grayhawk).