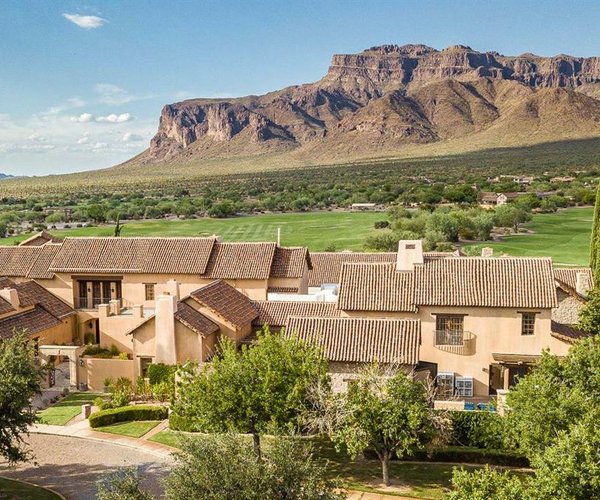 Above distances are for the Prospector course. Also at Superstition Mtn is the 18-hole par-72 Lost Gold course (7351 yards from back tees; course rating 74.0).

The Prospector course opened in 1998 and combined the creative skills of Jack and his son Gary. It is a community-based course that’s enjoyable for a broad range of golfing skills, but also contains plenty of challenges to test low handicappers and professionals. It’s been the site of a US Seniors major championship (The Tradition in 2002) and the LPGA's Safeway International.

The Lost Gold course, which opened in 1999, maintains the Superstition Mountain reputation for playability and top-quality green-keeping. Jack Nicklaus teamed-up with son Jack Jr. to design this links-style course. The layout offers generous fairways, but also possesses a higher shot value than the Prospector Course, due to slightly smaller greens and strategic bunker placements. The Lost Gold course was the site of the 2002 Senior Slam, when Fuzzy Zoeller edged Don Pooley by one stroke to win the $300,000 top prize.

The Superstition Mountains, also known as the "The Superstitions", are a range of mountains located east of the Phoenix metropolitan area in Arizona. The mountains are believed to be the home of the Lost Dutchman's Gold Mine. This very rich mine is named after an immigrant Jacob Waltz, who purportedly discovered it in the 19th century and kept its location a secret. Although Waltz was German, the term "Dutchman" was a common American slang term for "German," coming from the word meaning German, i.e. Deutsch.