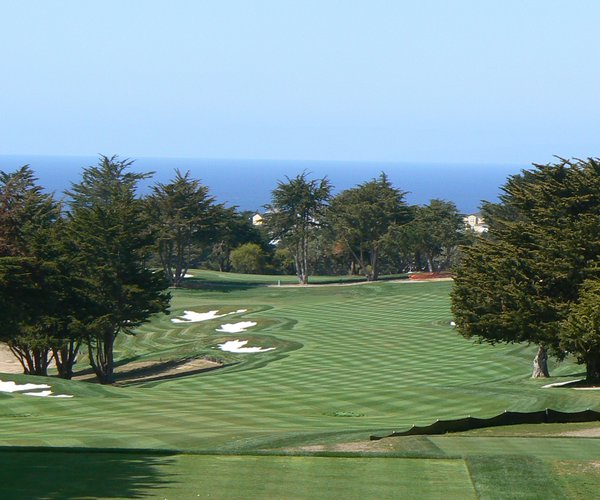 Distinctively different than its previous incarnation, Black Horse was transformed from a series of tightly tree-lined holes into a more open, flowing and at times links-like layout. The nicely undulating terrain provides many wonderful views onto Monterey Bay from its higher elevations - and that's the only water you'll be seeing. Like its stablemate, Black Horse has no water hazards to speak of - but don't think that will guarantee a low score. The new, rough-edged bunkering is not just visually striking, but is plentiful and strategically positioned to pose a real threat whatever your skill level.

Good width, tumbling fairways, lead you towards the roller-coaster slopes that characterise many of the greens - getting down in two will often require diligent reconnaissance as well as great skill.

Among many handsome, testing and heavily bunkered holes, top honours go to the long, downhill par-3 15th ... a brute if played into the wind, but also offering the best views onto Monterey Bay. The short par-4 16th, also littered with bunkers, is another gem, played to an unusually flat green.

Originally opened in 1964, the Black Horse golf course was created as the second 18-hole golf course at the former Fort Ord US army base. The layout was designed by General Edwin Carnes, the commanding officer of the fort from April 1963 until June of 1965. The course is named after the 11th Cavalry Regiment (known as the “Black Horse”), which was stationed nearby at the Presidio of Monterey.

Fort Ord was a military base from 1917 until its closure in 1994, and was understandably one of the most attractive locations of any U.S. Army post. Some of the beachside terrain formerly occupied by Fort Ord is now a State Park. The Fort was named in honour of Major General Edward Ord, a Union Army leader during the American Civil War.