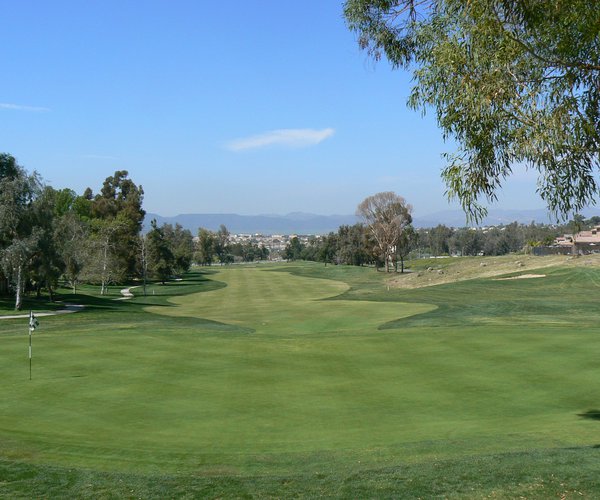 The Golf Club at Rancho California

The Golf Club at Rancho California

The Golf Club at Rancho California (formerly the Southern California Golf Association Golf Course) saves its most undulating and scenic holes for the closing stretch. The flip-side of putting the scenery and drama at the end, is starting you off with a few testing golf challenges, not least at the long opening par-3.

There is no doubting the quality of Trent Jones' design work, with many dog-legging holes wrapped around good sized lakes and ponds. The holes weave their way either individually or in pairs through an assorted collection of real estate; occasionally the housing comes close alongside the course, as at the par-4 6th. However, most of the time it is separated from the course by water hazards, plenty of stylish bunkering, a generous margin of not overly penal rough, and a scattering of tall eucalyptus and smaller pines, palms and birch trees.

The back-nine contains considerably more elevation change than the front, creating some of the best holes and most scenic views. The nearby Hogbacks range and more distant Santa Margarita mountains provide the panoramic highlights. The plunging, downhill par-4 12th, and uphill par-4 16th and 17th holes are three of the best to look out for.

Housing is present on some stretches of the back-nine, even though the overall feel is more natural than the front-nine, with bush-clad, grassy banks attractively skirting several holes, and a pleasant array of trees also playing its part.

The designer of SCGA Golf Course was the legendary, Robert Trent Jones. Born in 1906 in Ince, near Manchester, England, he became one of the world's most prolific golf course architects, involved with over 500 designs in 40 US states and 35 countries around the world. It is said that "the sun never sets on a Robert Trent Jones golf course." Aged 5 when his family emigrated to the USA, Jones later attended Cornell University, where he designed his own course of study to become a golf course designer, taking courses in landscape architecture, agronomy, horticulture, hydraulics, surveying, public speaking and economics. After initially working in Canada with Stanley Thompson, he struck out on his own in the late 1930s, designing and building courses in the USA. After World War II, Jones landed a big assignment designing Peachtree Golf Club in Atlanta together with golf legend Bobby Jones. Although they are not related, it was at this time that Jones began using his middle name "Trent" to avoid confusion between the two. RTJ's legacy lives on and has been much expanded by his two sons, Rees Jones and Robert Trent Jones Jr.