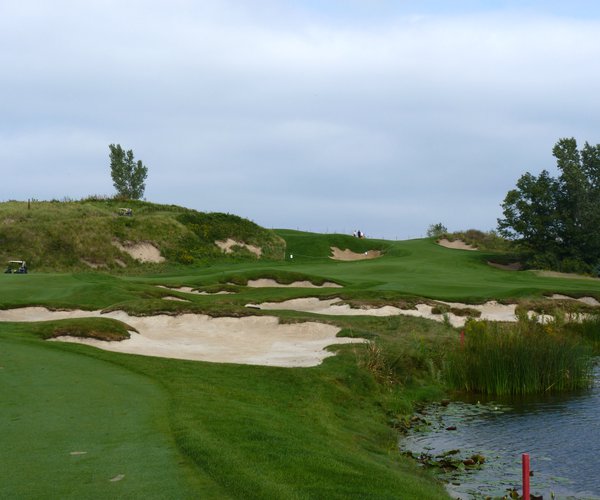 Harbor Shores Golf Club is home to a championship golf course that ranks with some of the best in Michigan. This tree-lined and at times open, links-style layout provides a wonderful test for your all-round game, with many attractive, skilfully crafted and challenging holes to enjoy. A must play if you are in the area.

Visitors welcome on weekdays and weekends during the golf season.

Non-metal spike facility. Golf cart compulsory (it's an 8.5 mile drive around this roaming layout). Golf carts are fitted with GPS.

Harbor Shores has hosted the Senior PGA Championship (2012 and 2014), one of the five senior major championships. | Each hole at Harbor Shores is named after a plant that is indigenous to the area. At each tee box a metal sculpture, with at least one piece of handblown glass, holds a plaque describing one of Jack Nicklaus’s 18 major championship victories. The sculptor Josh Andres, and the glassblower Jerry Catania, have studios in the Arts District in Benton Harbor.