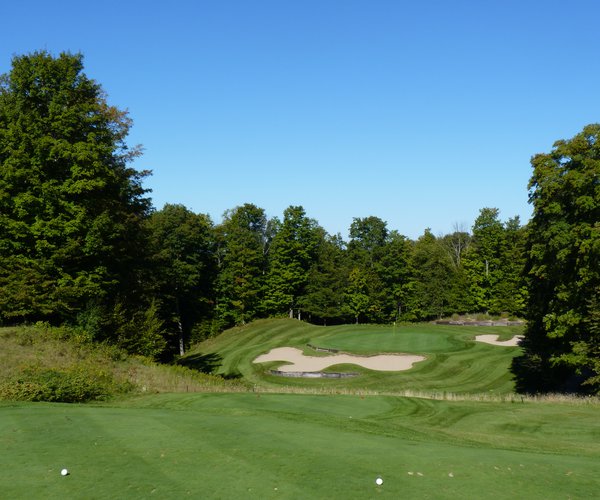 The Legend course is a well-rated and always popular layout. This tree-lined parkland course should not disappoint, with many attractive features and several excellent holes to enjoy. Plenty of golfing challenge, a well-crafted design and usually good upkeep all contribute to the appeal of this course. One to include on your play list if you are in the area.

Visitors welcome on weekdays and weekends during golf season (April thru' Oct).

Shanty Creek Resorts, including the Schuss Mountain and Summit Mountain ski, recreational and lodging areas, has its origins in resorts founded by Roy Deskin and Daniel Iannotti. Roy Deskin, the son of a coal miner, worked his way through Detroit’s steel factories to become a magnate in the industry. After a successful career, he retired "Up North" in 1944 and purchased a home on Torch Lake. The home developed into a private social club, then the Summit Mountain ski area was added, and the Lodge at Shanty Creek. The Lodge took its name from an old trapper's shanty home, and has since been renovated and re-named the Lakeview Hotel. The original "Deskin Golf Course" is today's Summit course. Separately, Daniel Iannotti, a Chicago stockbroker, developed a quaint, Bavarian ski hamlet known as the "Kingdom of Schuss." The first nine of the Schuss Mountain Golf Course opened in 1972. In 1985, Club Corporation of America bought and merged the Summit and Schuss resorts. Cedar River, the third village of Shanty Resorts, was added in the late 1990s.