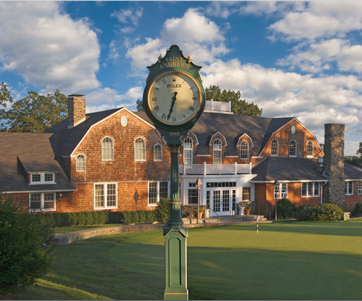 Saint Andrew's Golf Club is credited as the oldest private golf club in the United States. It is also one of the five founding members of the USGA, and has a name (along with a certain place in Scotland) that's known throughout the world of golf. All this guarantees Saint Andrew's place in golfing history. What ensures its current standing as a thoroughly enjoyable and rewarding test of golf, is the significant intervention made by Jack Nicklaus in the early1980s. The Golden Bear took on the redesign of the course and helped rescue the club from an otherwise steady decline into obscurity, from which it has now fully recovered.

The layout here comprises a mix of tree-lined and open parkland holes, with considerably more elevation change than you might imagine on first driving into the property. At the highest elevations, which includes the clubhouse, there are even views down the Hudson to faraway Manhattan. Although most fairways are either devoid of, or modestly bunkered, it's a different story around the greens, where sand traps proliferate.

A few of the par-4s and 5s are a little on the short side by modern standards, but the five par-3s are a formidable collection. The par-3 5th requires a carry over a small stream that fronts the green, while the picturesque 16th boasts a rock-lined water hazard (Jack's Glen) that cascades down the rightside of the smallish green. Best of all is the downhill 13th, played to another smallish green, which is stoutly defended by a large front bunker and a threatening small pond.

Saint Andrew's is a private club. Guests may only play if hosted by a member.

The oldest continuously existing golf club in the United States and one of the five founding members of the United States Golf Association (USGA), together with Shinnecock Hills, The Country Club (Brookline), Chicago GC and Newport CC.