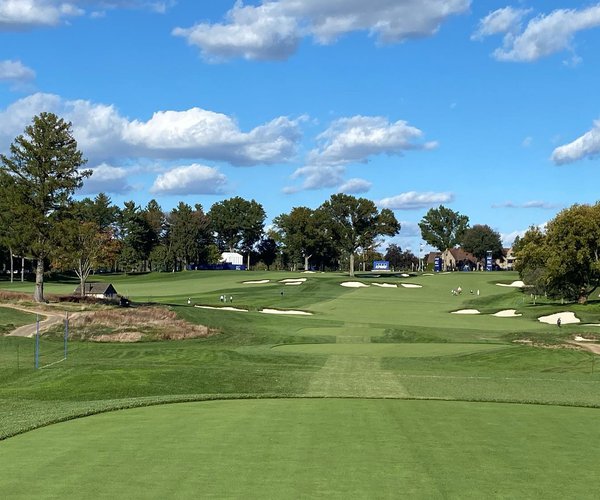 Aronimink Golf Club is home to one of the top-rated and finest championship golf courses in Pennsylvania. As you "step down" from the elevated first tee, the gently undulating and predominantly open parkland design opens-up a wealth of wonderfully crafted, memorable and challenging holes.

This traditional and much lauded club took up residence at its present location in Newton Square in 1928. Here Scottish-born Donald Ross laid out a course that is one of his most revered. The Ross challenge is evident from the very first hole, which presents a sharp drop from the tee, followed by a gentle 250-yard climb to the green.

A sprinkling of water hazards are in play as you make your way round, though vastly outnumbered by the huge array of greenside and fairway-lining bunkers. Aronimink is definitely a course to be enjoyed, and one that lays down an absorbing challenge for professionals and amateurs alike.

Limited access: this private course is generally playable only by members and their invited guests.

Aronimink is a private club. Guests may only play if hosted by a member.

Excellent (including a double-ended driving range)

Aronimink has hosted many top-level tournaments and major championships including the US PGA (1962), US Amateur (1977), US Senior PGA (2003) and US Women's PGA (2020), as well as prestigious PGA Tour events (see our Tournaments section >by Venue >Aronimink).

Aronimink Golf Club was originally formed by members of the Belmont Cricket Club, with a nine-hole course laid out at 52nd St and Chester Ave, much closer to Philadelphia city centre. In 1902 the golf club moved a short distance to 54th and Whitby St. As the city grew, the club relocated to Garretford in the Drexel Hill suburb in 1913. A final move came in 1926 out to the current location in Newtown Square.

Aronimink is said to be named after the chief of the Lenape native American tribe, who previously occupied the farmhouse that was used as the original clubhouse.