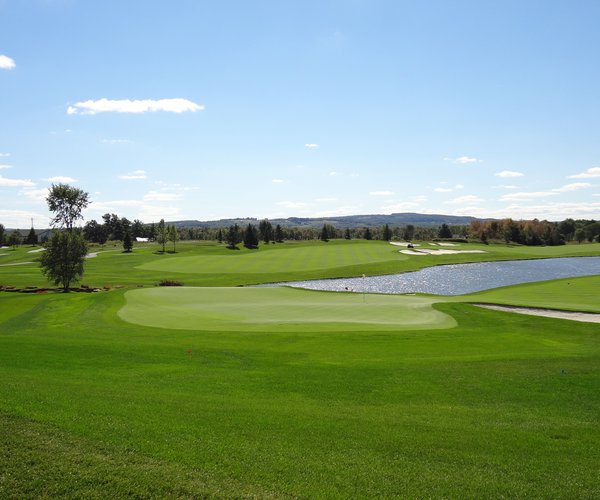 Turning Stone is home to three 18-hole par-72 golf courses. The Shenendoah course (7129 yds from back tees) and Kaluhyat course (7105 yds) share the same clubhouse alongside the resort. The Atunyote course (7315 yds) is located 3 mi from the main resort. Also at the resort is the player-friendly, 9-hole, par-36 Pleasant Knolls course (3338 yds from back tees) and the 9-hole par-27 Sandstone Hollow course comprising a collection of Rick Smith designed par-3 holes.

Turning Stone Resort (Atunyote Golf Club): Taking its name from the Oneida word for eagle, the Atunyote course at Turning Stone Resort soars above most other golf courses in the northeast of the United States. Here, just three miles from the main resort, you will find a fabulous Tom Fazio layout, which ranks alongside America's best.

Pronounced something along the lines of "a-doon-yo," rather than "a-tun-yott," this is a big dimension, championship layout that has regularly tested the top players of the PGA Tour. A mix of open parkland and more tree-lined holes, is characterised by rolling, tumbling fairways that lead to large, undulating greens. Along the fairways and around the expansive putting surfaces, large tongued bunkers lie in wait, while several holes are also defended by small lakes, streams, waterfalls and wetland areas.

The Atunyote layout is graced by a wonderful variety of top-quality golf holes, as well as picturesque views onto softly rolling, partly wooded hills. Roads and housing are happily nowhere to be seen. There's plenty of space from the tee for big-hitters, while the formidable array of sand and water defences is complemented by the large, undulating and at times mesmerising greens.

The Atunyote lays down a fabulous and scenic test for the recreational golfer, but its "talons" can also be readily sharpened for top-level tournament play. Inland golf courses don't get too much better than this.

Stay&Play: nearby accommodation is available in the resort's hotel, lodge and tower (3 miles northeast) (see Where2Stay section below).

The pronunciation of the course names at Turning Stone comes from the language of the Oneida native American people, who were one of the founding nations of the Iroquois League of central and upstate New York. Oneida means "people of the standing/upright stone." Atunyote (Oneida for eagle) is said something along the lines of "A-doon-yo," while Kaluhyat ("the other side of the sky") is pronounced "Ga-loo-ya." Shenendoah, sometimes spelt Shenandoah, is an Iroquoian word for "deer" and is said phonetically.