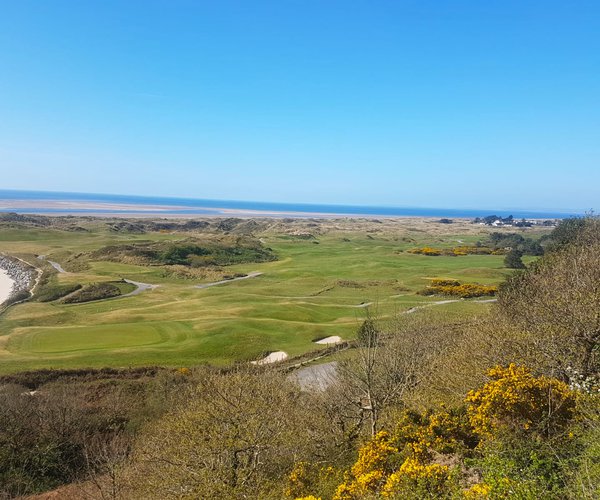 From the centre of Porthmadog, turn off the High Street direction Morfa Bychan / Blackrock Sands. After 1.5 miles golf clubhouse will come into view on your left.

Porthmadog Golf Club: By reputation this is another in an excellent collection of scenic links golf courses in North Wales. A fine mix of parkland holes on much of the front-nine, and a back-nine that is laid out across undulating sand dunes, and which provides full-blown links golf beside the sea.

You'll enjoy many stunning views out onto Tremadog Bay and inland to rugged hills behind the course, especially from the back-nine. Among many excellent holes is the long par-3 11th, which is rated stroke index 5 but often plays 1. This classic links par-3 plays at nearly 200 yds off the men's front tees, with plenty of gorse in front of you, out of bounds on the left and the sea behind.

Porthmadog and Borth-y-Gest Golf Club, as it was originally called, was opened in the early 1900's, with the course in play by 1905. In the early days members were expected to pay compensation for any grazing animals killed or injured by them. Numerous changes and modifications have been carried out since then, including the removal of any grazing animals from the course - be they dead or alive ! | A magical place to stay in this area is at Portmeirion, either in the Portmeirion village, the hotel, or at the recently refurbished Castle Deudraeth, just before the village (see Where2Stay section below).