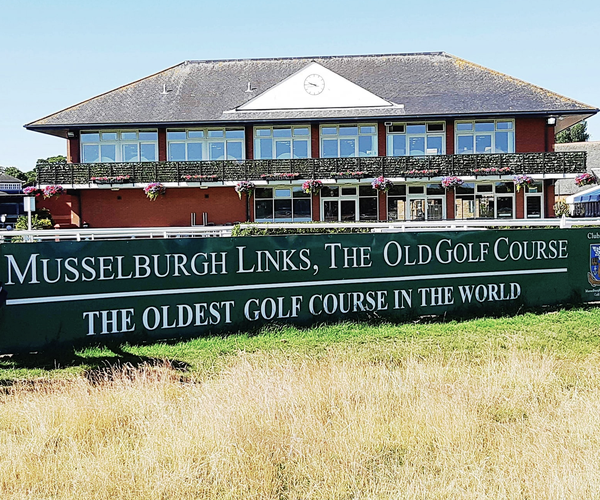 Musselburgh Links (The Old Course) is the home course of Musselburgh Old Course Golf Club (MOCGC), founded in 1982 and now the only Golf Club attached to these Links. Although the Links clubhouse/Starter's cabin has few facilities, MOCGC has its own clubhouse adjacent to the course, which was originally built in 1873 for The Edinburgh Royal Burgess Golfing Society.

The authentic and original period clubhouse offers a full range of bar, catering and changing facilities, which can be used by individual visitors, as well as groups and societies, by prior arrangement with the Secretary. If you want to become a part of golf's earliest history, MOCGC also now offers very competitively priced Associate and Overseas memberships. Details can be found on the Club's website, www.mocgc.com.

On the eastern outskirts of Edinburgh, at the junction of the A1 and A720 (Edinburgh by-pass), follow the A1 direction Berwick-upon-Tweed. After 1.7 miles take the A6094 direction Wallyford. After 1 mile at roundabout turn left onto the A199 Haddington Road. After o.7 mls go straight across roundabout, staying on the A199 (now called Linksfield Road). After o.6 mls turn right into Millhill Wynd, direction Musselburgh (Old course). After 200 yds turn right into Balcarres Road. After 300 yards golf is on your right.

Musselburgh Links (The Old Golf Course): Musselburgh Links is the world's oldest playing golf course, previously hosting The Open Championship on no less than six occasions. Although only a nine-hole course, these delightful golf links are assured their place in golfing history. To delve into the history of Musselburgh's Old Course is to get in touch with the very beginnings and roots of golf. But Musselburgh Links is more than just a trip down Memory Lane.

The out-and back design (you could also say a trip down to Mrs Foreman's pub and back) makes for a thoroughly enjoyable and at times challenging golf outing. The course is now encircled by Musselburgh horse racing track, but the rails and racing paraphernalia do not seem to get in the way of enjoying this pleasant and nicely maintained links layout. In true links fashion, the gently rolling fairways are characterised by crisp turf, the greens here are firm and fast and the pot bunkers small and strategically placed.

Good-shot making will be needed to stay out of the ball-swallowing lush grassy rough that lies beyond the rails (i.e. the race track). A round here at Musselburgh Links is not about taking on a modern, "monster-length" layout, as much as enjoying the erstwhile pleasures of a simple, unpretentious 9-hole course that has been played on for more than 500 years.

HISTORICAL NOTES: During the 1800s three prestigious golfing societies moved to the Musselburgh Links, forced from their previous Edinburgh homes by the growing popularity of golf in the city, and consequent overcrowding on their original courses.

The Honorable Company of Edinburgh Golfers arrived in Musselburgh in 1836, arriving from the city's congested Leith Links (which is now a public park). The Edinburgh Burgess Golfing Society (nowadays Royal Burgess) arrived in 1874 from their former Bruntsfield Links home, which was less than a mile south of Edinburgh Castle. They were soon followed in 1878 by the Bruntsfield Links Golfing Society itself. However, these three 'migrants' were temporary visitors.

As congestion on the Musselburgh Links developed in the 1890s, the Honourable Company (1891) moved to a new Tom Morris designed 18-hole course (called Muirfield) on the Archerfield Estate at Dirleton. The Edinburgh Burgess Society (in 1894) and Bruntsfield Links Society (in 1898) moved in the opposite direction, crossing the city to new and adjoining courses in Barnton.

These same Musselburgh Links, on which golf was certainly played in the 1500s, hosted The Open Championship on six occasions between 1874 and 1889. During this period the championship was rotated between Musselburgh, Prestwick and St Andrews. For more details view Top Golf Tournaments at The Royal Musselburgh Golf Club.

In the 1980s a group of local enthusiasts formed the Musselburgh Old Course Golf Club (MOCGC), bringing a much needed revitalisation to the course in the process. | In the Starter's cabin you will find an excellent collection of golfing souvenirs, commemorating this the world's oldest playing golf course.

To experience golf as it was in earlier times, you can rent from the Starter and play with a set of authentic hickory-shafted clubs.