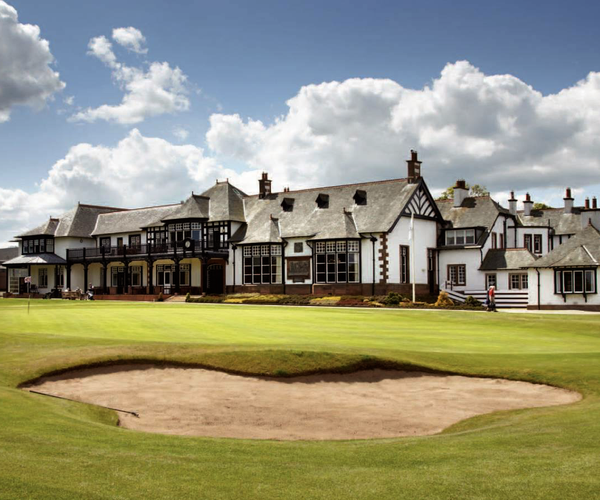 From the centre of Edinburgh take the A90 to the city's north-western suburbs, direction Barnton. In Barnton, at the intersection of the A90 (Queens Ferry Rd) and A902 (Maybury Rd), head north on White House Rd. After 150 yds, golf entrance is on your right.

The Royal Burgess Golfing Society of Edinburgh: Established in 1735, Royal Burgess is arguably the world's oldest golf club (the argument is mainly with the Honourable Company of Edinburgh Golfers, at Muirfield, and Royal Blackheath in London ... see 'Historical Notes' below).

Still located next to its original neighbour (Bruntsfield Links Golfing Society) this Old Tom Morris / James Braid layout is a quintessentially British parkland golf course. The nicely undulating terrain provides for a pleasant mix of holes, with some played either up or downhill, and several others occupying a less undulating, flatter plateau. The most significant elevation change comes at the testing downhill par-4 11th, where a blind drive over a marker stone sets you on your way.

In this partly open, partly tree-lined setting, a wonderful variety of trees and occasionally bushes separate the generally good-width fairways. On a few holes, recently introduced water ditches will need to be crossed, while grass-walled bunkers may not always be too conspicuous, but will certainly need to be factored into your course management, especially on approach shots to the often large and rolling-edged greens.

Although there is nothing much to see beyond the mainly tree-lined course perimeter, Barnton (as it is often called) is an absorbing layout that will pleasantly test your golfing skills. Back in the clubhouse there's the chance to explore the long history of this oldest of golf clubs.

HISTORICAL NOTES: Royal Burgess Golfing Society traces its origins back to 1735 (this foundation date was recorded in Edinburgh Almanacs from around 1834 onwards). This would make the Society the world's oldest golf club, although the name Edinburgh Burgess Golfing Society was not formally adopted until 1787. Two other contenders also claim to be the world's oldest existing golf club. The Honourable Company of Edinburgh Golfers (based at Muirfield), has club records going back to 1744, while Royal Blackheath in London, claims to have been established in 1608.

What is clear is that a society of burgesses (property owning citizens) originally played golf on the Bruntsfield Links in Edinburgh city. The course comprised 6-holes, had been played on since the 15th century, was less than a mile south of Edinburgh Castle, and is now a 36-hole pitch & putt facility.

Visitors welcome on weekdays and weekends (after midday).

First established in 1735, Royal Burgess Golf Society can lay claim to being the world's oldest golf club, according to the authoritative website Scottish Golf History (.org). This website lists the oldest golf clubs/societies based on three criteria: i) a formally organised group meeting regularly for the purpose of golf; ii) dated evidence of the club/society's existence, and iii) its continuity of existence.