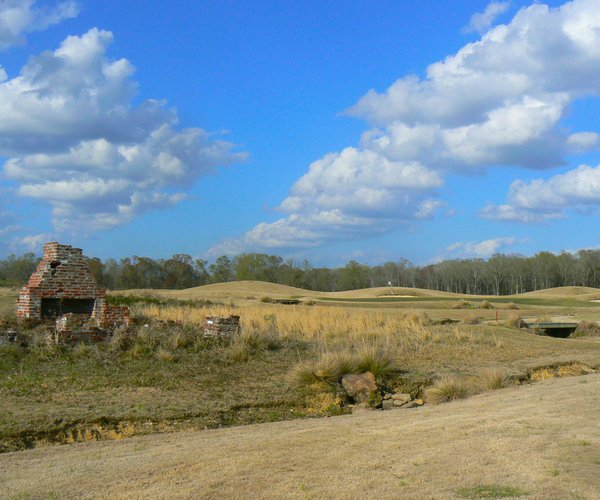 Copper Mill Golf Club: Although part of a developing residential community, Copper Mill exudes a predominantly natural feel, based on its quiet location, excellently crafted holes and Scottish-influenced, linksy character - comprising three par-3s, three 4s and three 5s on each of two nine-hole loops, the layout attractively weaves its way through open fields of native grasses, passing centuries-old live oaks - generally retaining an linksy-openness, the dune-like mounding, stretches of quite penal rough and stylish pot bunkering really capture the spirit of Scottish links golf - the golfing landscape is also home to several small lakes and ponds, ensuring water is in play on at least half the holes - 60 yards before the green, Cypress Bayou slices across the fairway on the par-4 5th, and then threatens again as it crosses and meanders up the side and around the green of the tough par-4 17th - on the few occasions where housing flanks the perimeter, it is never intrusive and includes an eclectic mix of New Orleans French Quarter style dwellings, and also large, upscale housing, many of which include French architectural styles - whether the well-distanced housing or the golf course itself, attention to detail is clear to see - even the "old ruin" found alongside the 17th looks thoroughly authentic (perhaps it is !) - this is a fun and wonderfully varied layout, full of character and plenty of golfing challenge.
List of courses: Louisiana

Copper Mill is located just west of and alongside the town of Zachary, which started life in 1885 as a small community, named after the farmer on whose land it was built. Zachary has now become a popular and affluent commuter town to Baton Rouge (the state capital), spurred on by its frequent ranking as one of the top school districts in Louisiana. Copper Mill will add to the availability of quality housing in the area and has plans to introduce on-site hotel/lodge accommodation in 2011/12.